After St George’s Hall re-opened as a civic concert hall in 1953 an explosion in contemporary music created new audiences.

Huge cultural changes can be mapped through the musical performances staged at the venue over the decades. Many local people hold St George’s Hall in great affection for presenting live performances of ‘their’ music and providing unforgettable experiences which define their lives and generation. 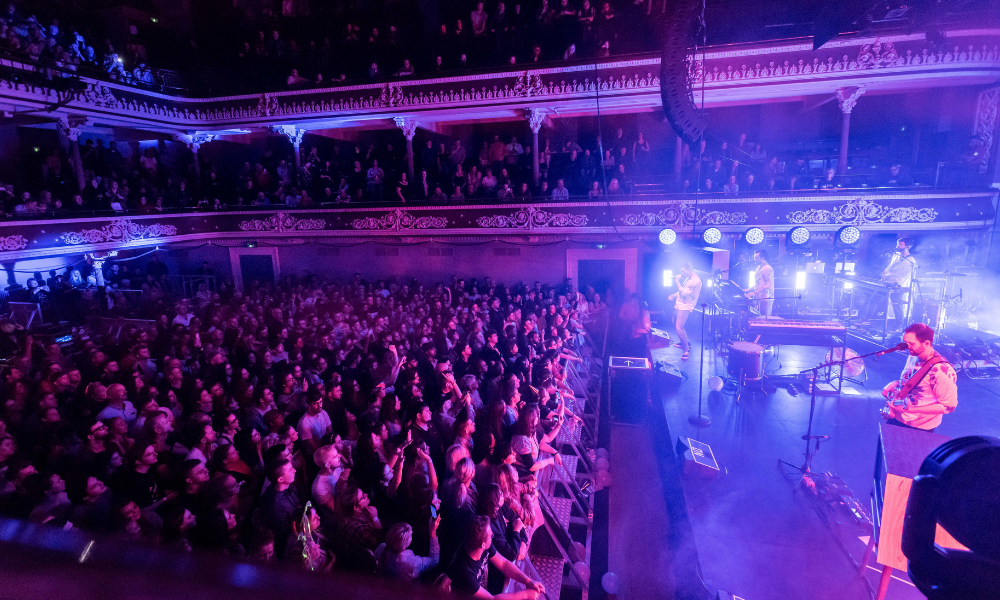 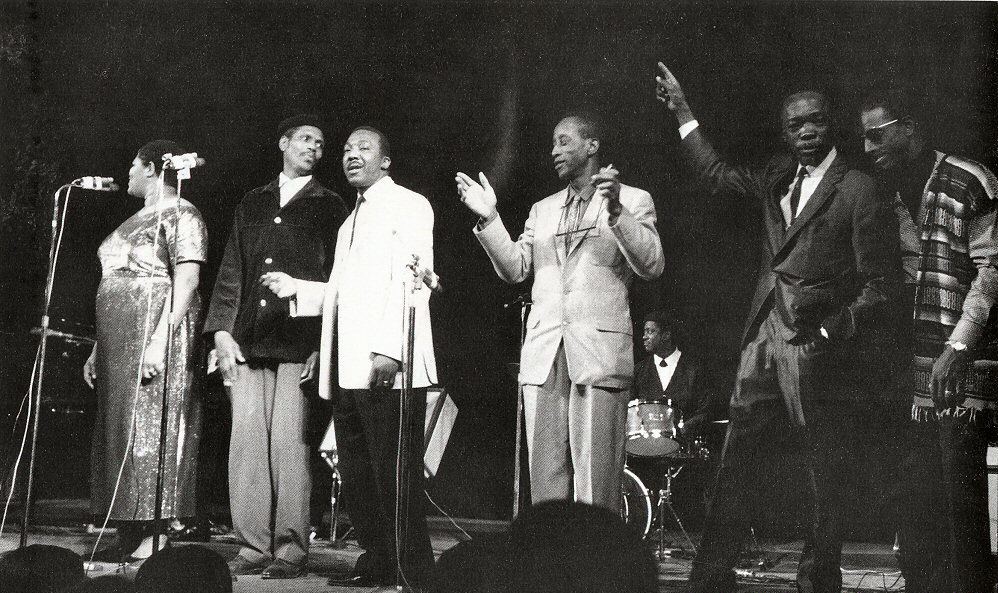 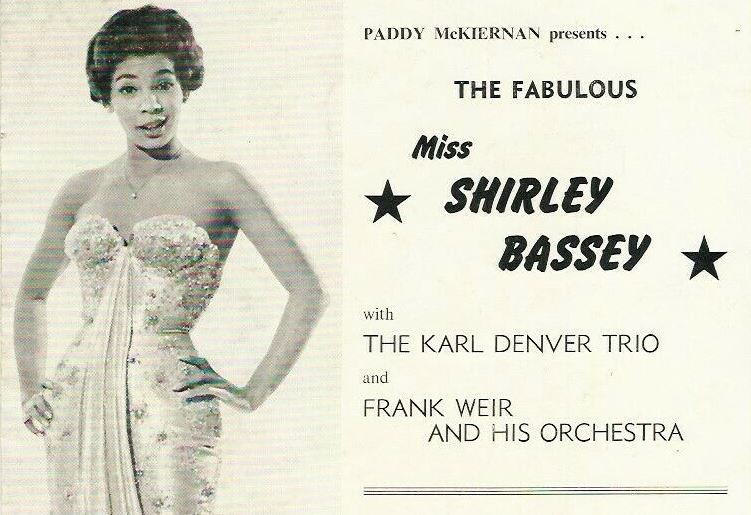 'The Birth of Blues' Shirley Bassey

In the 1950s and 60s some of the world’s greatest blues and jazz artists performed at St George’s Hall.

In 1957 Count Basie, billed as ‘the world’s top jazzman!’ appeared with his orchestra at St George's Hall. This was followed by Sister Rosetta Tharpe ‘the godmother of rock' n’ roll’, Dizzie Gillespie with the Newport Jazz Festival and the jazz singer Sarah Vaughan with the Jonny Dankworth Orchestra. A young Shirley Bassey also sang at St George's Hall in this era.

In 1962 American rock star Jerry Lee Lewis set the venue alight, with couples bopping in the isles to his no 1 hit Great Balls of Fire.

Around this time an array of Britain’s first teen idol rock stars performed at the venue including Tommy Steele, Cliff Richard, Marty Wild and Adam Faith. The rock and roll band, Johnny Kid and the Pirates, thrilled audiences  as they performed in full pirate gear including thigh length leather boots, cutlasses and eye patches

In 1964 The Rolling Stones performed two shows. This was the band’s second British tour playing covers, their hard-driven sound coming to represent the youthful rebellious counter-culture of the day. 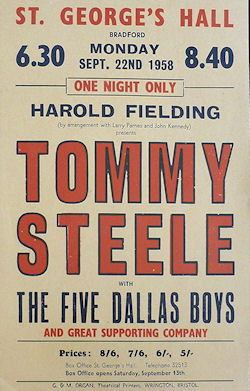 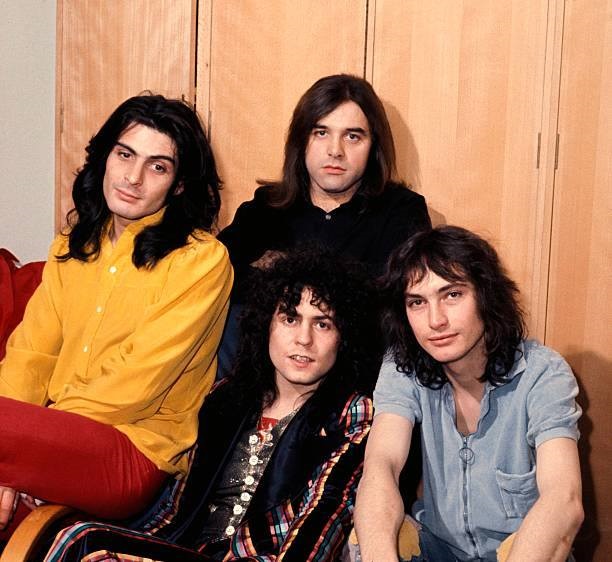 The 1970s were the start of a golden age of rock and pop at St George’s Hall.

In the early 70s, amongst a wide range of genres being performed at the venue, glam rock stars were pushing boundaries with experimental new sounds and gender-bending theatrical costume.

This includes David Bowie as Ziggy Stardust and the Spiders from Mars in 1972 and 1973, Marc Bolan with T Rex, Roxy Music, Slade, Sweet and, in 1974, Freddie Mercury with Queen as part of their first world tour.

In 1976 Elton John appeared as a surprise guest of Kiki Dee to sing their no 1 hit single Don’t go Breakin’ my Heart.

Led Zeppelin are one of the most innovative and influential rock groups in history and in 1973 they performed at St George’s Hall.

In this period St George's Hall was rocked to it foundations not only by Led Zeppelin, but also by a host of famous hard rock and heavy metal bands such as Hawkwind, Black Sabbath, Motorhead, Free and Status Quo. Progressive or ‘prog’ rock bands such as Jethro Tull, Yes, Genesis, Gentle Giant and Van der Graaf Generator, also played at St George's Hall.
‍
It was not uncommon during this time for fans to meet their heroes in person before or after the gig. Such as the young fan who found himself chatting to Lemmy in the auditorium before his appearance on stage.‘My claim to fame – chatting to Lemmy at St George’s Hall.  I was 15 when I first went and it was there I saw all my heroes… it was magic!' Audience member Jeff Willacy. 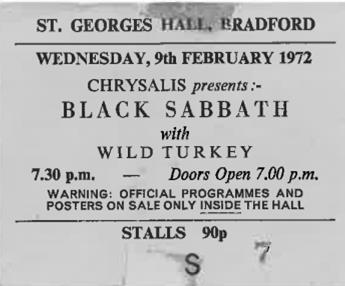 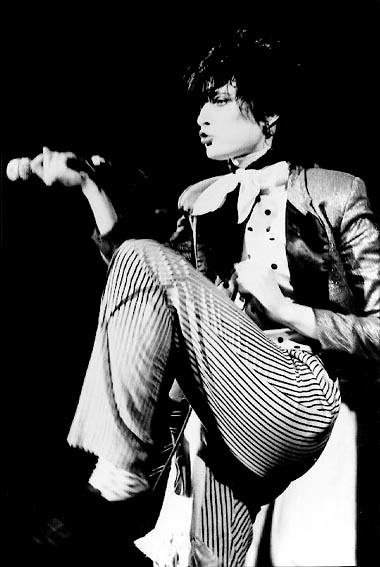 Siouxsie And The Banshees St Georges Hall 24 September 1979. Credit thebanseesandothercreatures.co.uk
Click on the image above to see more pictures

'Rock the Casbah' The Clash

From the late 1970s punk rock, with its stripped back, fast paced instrumentation and anti-establishment lyrics, was performed at the venue.

Fans went wild pogo-ing along to bands such as Siouxsie And The Banshees, Sham 69, The Buzzcocks, The Slits, The Damned plus The Clash who played at St George’s Hall a total of 3 times. Refusing to sell out by playing on the Top of the Pops, The Clash apparently liked the venue for its municipal grandeur.

During the 1980s St George’s Hall hosted the very best in an explosion of post punk and new wave music with The Stranglers, Blondie, Adam & The Ants, The Cure, The Jam, Elvis Costello and The Attractions, and The Smiths.

During this decade highly successful home grown rock bands like New Model Army, The Cult, and the Skeletal Family, filled St George's Hall with fans from across the district and around the country.

'Together in Electric Dreams' The Human League

Changes in music technology can be mapped by the appearance of synth-pop and electronic pop music at St George’s Hall.

After Electronic musical synthesizers first became available in the mid-1960s, the late-1970s saw the rise of electronic music as a subgenre of new wave, and many artists who used the synthesiser and other digital instrumentation as a key part of their sound appeared at St George’s Hall.
‍
These include Gary Numan of Tubeway Army who used a futuristic visual style and lyrics to comment on the growing significance of new technology in society. Other synth bands to perform around this time were Depeche Mode, New Order, Soft Cell. Orchestral Manoeuvres in the Dark (OMD) and The Human League.

As synthesizers began to dominate the pop and rock music of the 1980s, St George's Hall saw an even wider variety of bands using digital instrumentation including Spandau Ballet, Erasure, Communards, Bronski Beat and The The performing at the venue. 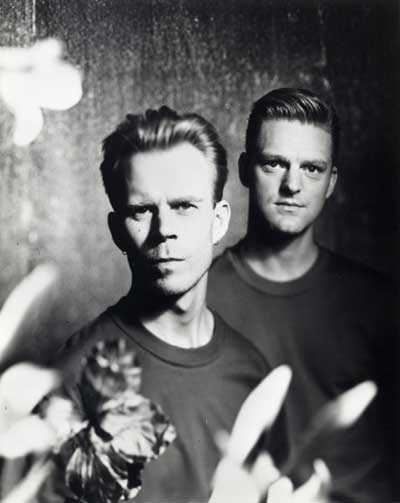 Erasure. Credit David Scheinmann
Click on the image above to see more pictures 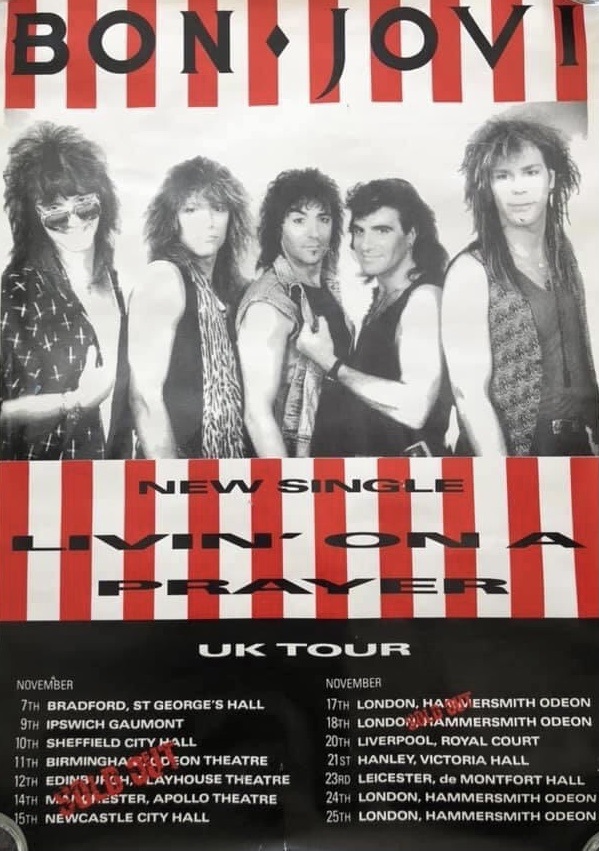 These include Metallica, now considered Americas greatest heavy metal band, who played at the venue twice in 1986 and 1988, Australian rockers INXS, one of the world’s best-selling rock bands, Kiss, with their Crazy Nights tour, and Bon Jovi as part of their Slippery When Wet tour.

Other heavy rock bands to play in this era are Magnum, Megadeth, Whitesnake, AC/DC, Anthrax, Def Leppard and the all-female rock band Girlschool on their Screaming Blue Murder tour.

Despite the ferocious sounding music associated with these bands, audiences who attended these events enjoyed hearing heavy rock in the fabulous acoustic and Victorian grandeur of St George's Hall and are reported to have been very well-behaved!

'Take That and Party!' Take That

From Boy Bands to Girl Power, in the 1990s high profile pop stars brought a new generation of fans to St George's Hall.

Prior to playing sell out arena tours, Take That, Boyzone, Steps, Sugababes and McFly all performed at St George's Hall to thousands of adoring young fans in the 1990’s and early 2000s. Other fantastic groups that performed in that era include The Beautiful South, Texas, Deacon Blue, Another Level, Eternal, and then in 2000 A1 performed at St George's Hall with their uniquely titled tour A1:UK:2K!
‍
Solo artists such as Belinda Carlisle, Louise, Danni Minogue and Gabrielle all played to packed houses and in 2000 St George's Hall welcomed 'Sporty Spice' Mel C on her Northern Star tour. 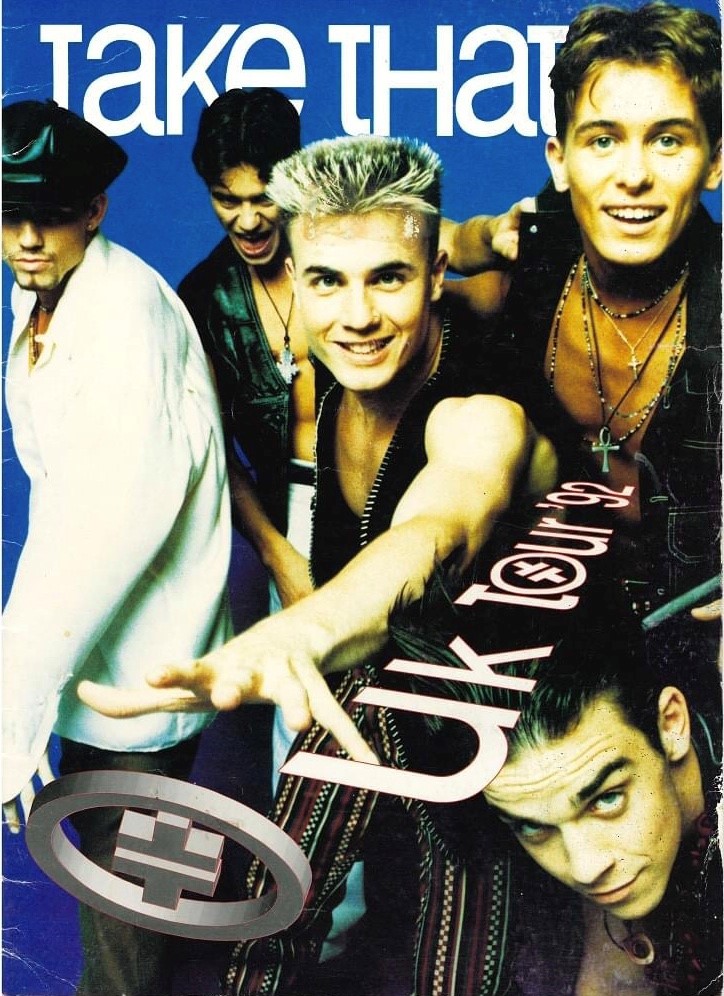 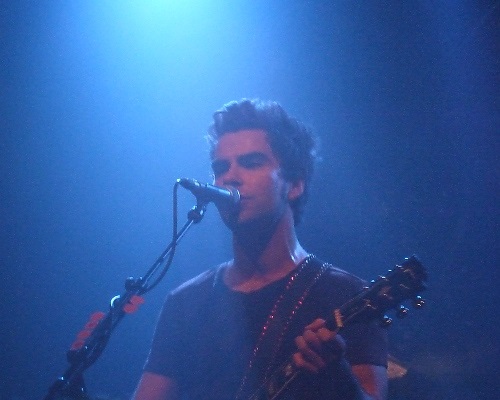 In the early 1990s St George’s Hall continued to welcome bands such as The Wonderstuff, Hothouse Flowers, Inspiral Carpets, The Levellers and Runrig.

Cool Britannia ruled the waves in the mid to late 1990s with bands such as Suede, The Verve, Ocean Colour Scene, Cast, Ash, Supergrass and Bradford’s very own Terrorvision.
‍
Into the new millennium, with many bands playing to huge audiences in vast arenas, St George's Hall was still a draw for groups who wanted to play in an intimate and atmospheric venue including Shed Seven, Stereophonics, Franz Ferdinand, Doves, Embrace, Editors, Scouting For Girls, The Cribs, Bastille and Mumford and Sons.

Crooners have delighted audiences at the Hall since the 1950’s, singing classic arias and the standards from the great American songbook.

In March 1994 the legendary singer Tom Jones played three consecutive sell-out nights, while in February 2002 Harry Connick Junior captured the audience with his smooth and silky singing voice, crooning to many of the 1950s and 1960s easy-listening classics. 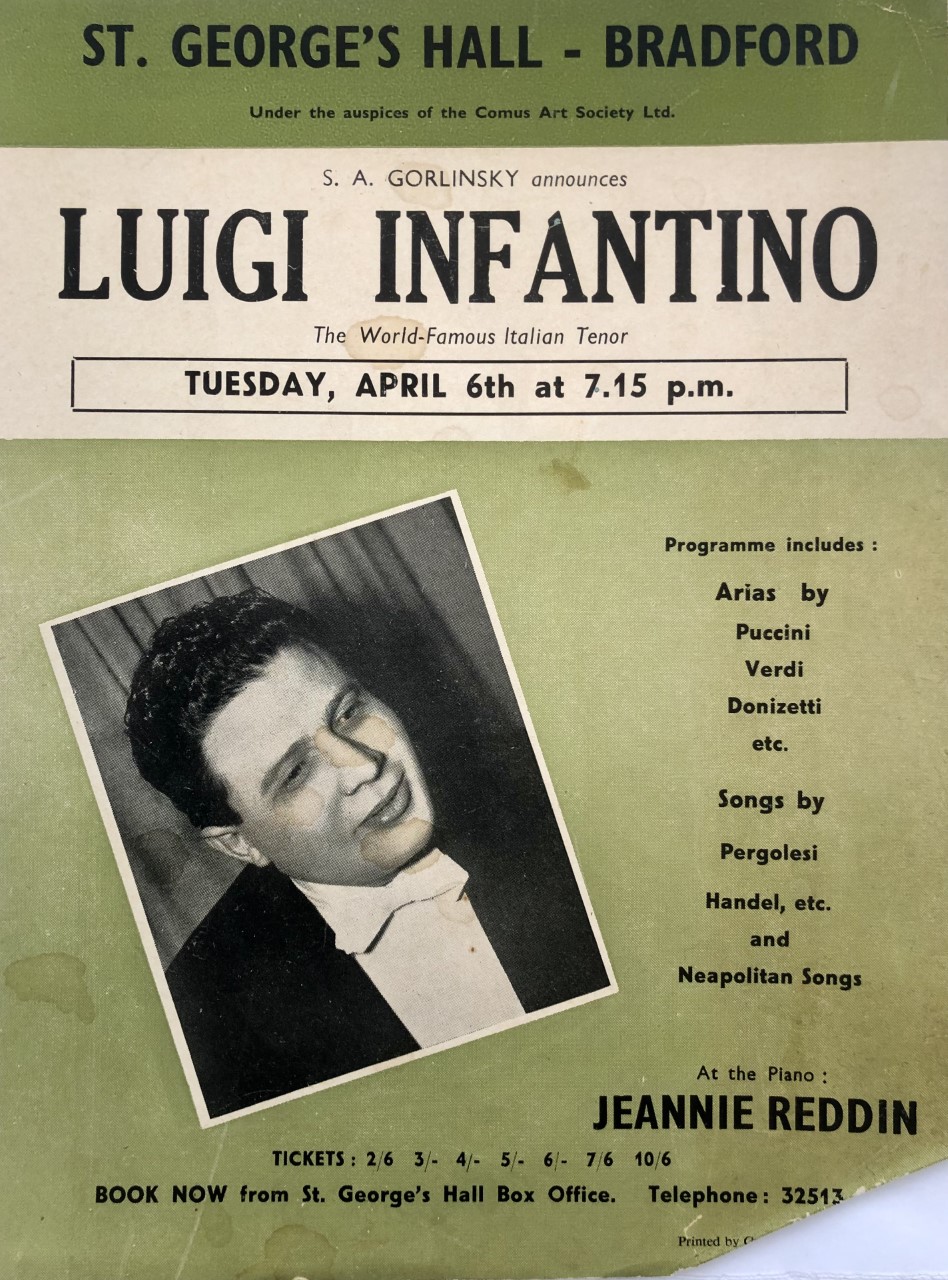